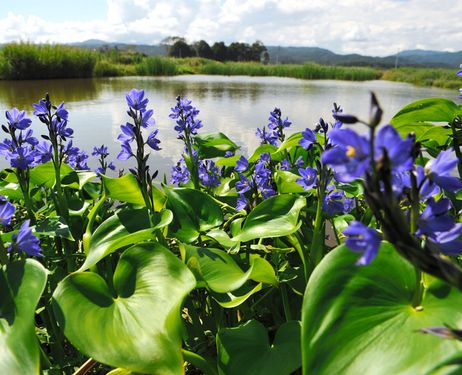 NARAHA, Fukushima Prefecture--Whereas last year's devastating earthquake and tsunami turned rice fields here into swamps and destroyed vegetation, it did miraculously bring to life an endangered flower never seen in these parts until the disaster.

The areas around the former rice field were engulfed by tsunami following the Great East Japan Earthquake. As the areas suffered ground subsidence in the disaster, they have become swamps.

Before the March 11, 2011, disaster, Mizuaoi had not been seen here. But it is believed that the soil was stirred up by the tsunami, and seeds that had been lying dormant underground were brought to the surface and later bloomed.

Similar appearances of Mizuaoi have been observed in several coastal areas hit by the earthquake and tsunami, said Yoshiyuki Nagahata, author of the book titled, “Kyodai Tsunami wa Seitaikei wo Do Kaetaka?” (How did the huge tsunami change the ecosystem?).